Traditional festival that takes place every year in May, in San Dorligo della Valle. It revolves around erecting the "maj", the trunk of a fir tree, approximately 15 m high, with a whole cherry tree on top. 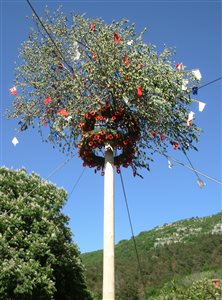 The boys and girls of the village prepare for months and months for the Majenca, so they are ready to dance under the tree when the spring arrives. The strength behind this traditional festival, with its dances, music and local food and wine, is the Community: from the Slovenian Skd Valentin Vodnik society and the Municipality of San Dorligo, to the Local Education Authority and the wine and olive producers.

A festival of old traditions, held in Dolina, in the heart of San Dorligo della Valle, every first Sunday of May since time immemorial.

Majenca is a celebration of the young, so naturally it is organised by the fantovska and dekliška, the boys and girls youth clubs of the village. Boys and girls, from 14 years old and over, meet at the end of the winter for the first fantovska in dekliška ura, when they elect the župan, the mayor, and form the organising committee. From then on, preparations start and everyone is given a task suitable for their age, for which they are personally responsible. Only other two "ure" briefly interrupt the hectic preparations: the second, during which the županja is elected, and the third just before the first of May, when the Majenca is announced by erecting a poplar tree near the village fountain.

The parterji, boys around the age of 18, and parterce, 16-year-old girls, play a special role: on Majenca Sunday they open the dances under the maj.