Trieste and the Cinema : because all events are here

The cinephile tradition in Trieste and the region is also based on other factors. First and foremost is university study.

But why are all of these events concentrated here? 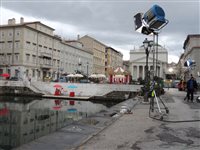 The cinephile tradition in Trieste and the region is also based on other factors. First and foremost is university study. It was in this very city that the oldest "Film History" university course in Italy was started by the forward-looking Tino Ranieri and later strengthened by Lino Miccichè, beginning in 1973.

In 1976, teaching passed to Alberto Farassino, a former writer for "Repubblica", a modest and enlightened critic and teacher and a militant cinephile, who over more than twenty years of teaching educated an entire generation of students to which I have the honour of belonging. During my years of study at the university, in the 1990s, the Performing Arts Department of the College of Liberal Arts was expanding. In addition to the Film History Department, there was a new Film Theory Department (the subject in which I earned my degree under Roberto Nepoti), and in subsequent years a Film History and Criticism Department, with courses held by Francesco Casetti.

Today, many of these former students, who are now in their 40s, are involved in cinema in the city and the region - some teach, some work for the festivals and others organize and promote cultural activities. Personally, I am involved in film criticism. I write for the newspaper Il Piccolo and other online publications.

What I still like most about film is discovering and sharing. And a desire for the new has not been exhausted in Trieste. In 2013 a new cinema devoted to independent films opened in the heart of the city. It shows those "invisible" films for which it is difficult to find an appropriate venue: early works, documentaries and other "mysterious objects" of the seventh art that are in line with the pioneering spirit of discovery and avant-garde nature that has always characterized the city.
In short, it may not be Rome or even Milan. We don't have the previews, but we can get around on foot and in the summer we can go to the beach. And cinema is in the air all year long.