The largest square facing the sea in Europe. 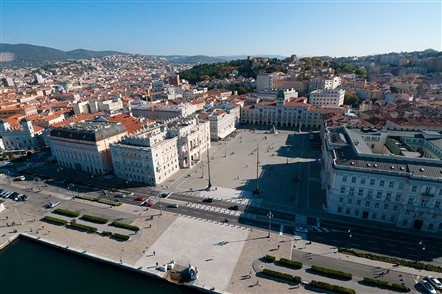 When you arrive in Trieste by sea, the city seems to welcome you with open arms.
The creation of the square was the final show of power, strength and solidity of a great empire that was drawing to an end. It brings to mind the final act of a theatre performance, with a line-up of all of the leading players that made the city great: the Art Nouveau government building, the Assicurazioni Generali building and the Lloyd Triestino building, cornerstones of the commercial hub, and City Hall, which was the last to be built.
In the past, the old marina was located here - the blue lights on the pavement of the square indicate the former water's edge. In addition, the square was closed off from the sea by a building that was located along the shore.
Over its history, it has often been the setting for events that shaped the destiny of the inhabitants of the city and beyond.
Examples of just a few such events from the twentieth century follow. On 2 July 1914, the boat decorated for mourning that transported the remains of Archduke Franz Ferdinand and his wife Sophie landed at the quayside of this square, marking the end of a world. 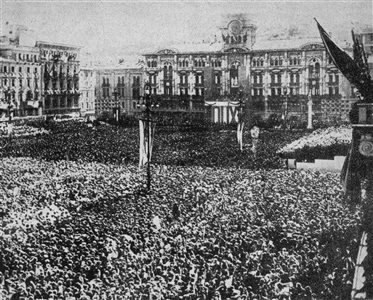 On 3 November 1918, crowds of residents joyously awaited the beginning of a new chapter in the city's history, with the arrival of the destroyer Audace and the birth of a new Italy. In this same square, on 18 September 1938, Mussolini's terrible words announced the enactment of the Racial Laws from a stage built for the occasion. The speech was transmitted by radio to squares throughout Italy and beyond. In memory of this sad day, the city erected a bronze commemorative plaque on 18 September 2013. Finally, on 26 October 1954, crowds cheered the arrival of Italian troops once again.
Merchants, sailors, intellectuals, tourists and crowned heads of state have landed in this beautiful square - it is not by chance that the residents affectionately call it the "city's front parlour". It was and is a square for receiving guests!
Today, as in the past, people meet in the square to drink a coffee at the bar on a Sunday morning or enjoy an aperitif while watching the sunset. It is also here that children take their first steps, ride bicycles and chase after each other. 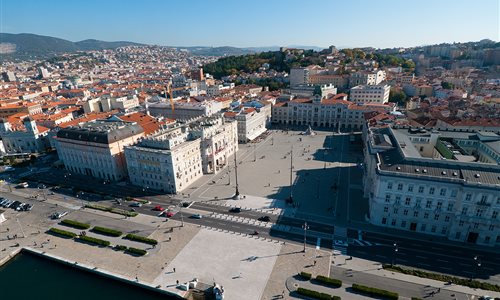