An Evangelical community of the Augustan Confession has existed in Trieste since 1778.
Evangelical Lutheran Church 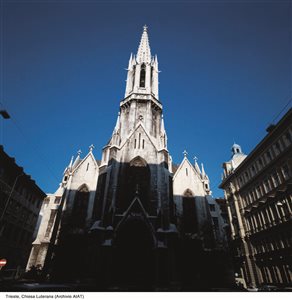 The middle class of Trieste was open to the new spiritual ideas arriving from beyond the Alps, enthusiastically following and participating in sermons held in the spirit of the Lutheran Reformation.

The first Lutheran merchants began arriving in 1719, when the city became a free port. It was not until 1778, however, that first Empress Maria Theresa, and later her son Joseph II, authorized the holding of religious services in a private home.

In 1786, the Lutherans acquired the church dedicated to Our Lady of the Rosary, located in the oldest part of Trieste. The church was later resold to the city in 1870, making it possible to build the current Evangelical Lutheran church on Largo Panfili.

Measuring 35 metres long and 22 metres wide, the church was designed in the Neo-Gothic style by the architect Zimmermann from Wroclaw and built by the firm Berlam e Scalmanini.

The church, which opened for services in 1874, features pitched slate roofs. The pointed bell tower stands 50 metres tall and is adorned with elaborate spires. Inside, above the altar, visitors can admire the beautiful stained glass choir window, which depicts Raphael's Transfiguration of Christ and was made by the Zettler glassworks in Munich. 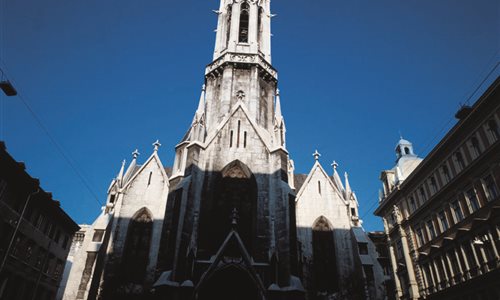