Kleine Berlin is the biggest system of underground anti-aircraft tunnels still in existence in central Trieste.

It consists of two distinct but interconnected systems, one built by the city authorities as a bomb shelter for the civilian population, and the other, which had a completely different structure and was used as a warehouse, storage depot and air raid shelter, built by the German army after the SS Adriatisches Küstenland (Adriatic Coast) headquarters were set up in Trieste on 8 September 1943.

The Italian section is made up of a network of tunnels containing basic equipment for brief stopovers, a sick bay and restrooms.
The German section is a well built and very complex structure consisting of a long tunnel with intersecting perpendicular stations of about 1,000 square metres. It was used exclusively by the SS and their appalling commander Globocnik, who used this dense network of tunnels to move from SS headquarters at the Court building on Via Fabio Severo to his Villa Ara residence.
Kleine Berlin
via Fabio Severo
entrata alle gallerie di fronte al civico n.11
tel. +39 040 349 8239

possibility to book visits from Monday to Friday for groups of at least fifteen people.
On weekends the Kleine Berlin is closed.
Guided tours every last Friday of the month at 6pm and 8pm
Follow us on 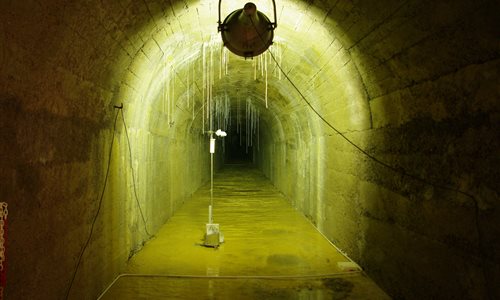