The World's most crowded regatta

It was 1969.
Four Liverpool lads were singing "Come Together".
Ten young people from Trieste were keen to organise a regatta. 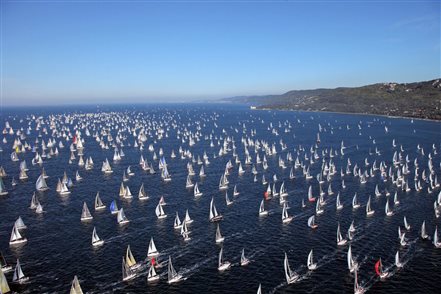 They were - and still are - indisputably less famous than the Beatles, but, without knowing it, they created one of the world's most famous sailing events: the Barcolana, or Coppa d'autunno (Autumn Cup) as it was first known.

The Barcolana, the largest sailing regatta in the world, is held on the second Sunday of October each year, a date that was chosen originally because other sailing clubs were already organising regattas and competitions earlier in the year.

What was needed to take part in the Coppa d'autunno? A boat. No more, no less. No need for carbon sails, racing hulls or tonnage certificates. Just one requirement: love of the sea and a wish to share this passion.

There was an enthusiastic response: 51 boats lined up at the start of the first event. In 2002 1968 vessels sailed between Barcola marina and Miramare Castle.
Barcolana record! 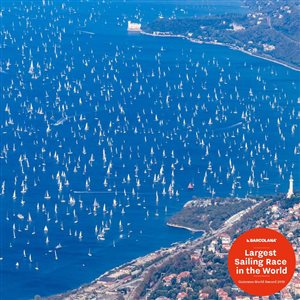 A real sailing party on Sunday, October 8, 2017 in Trieste for Barcolana 49, which has surpassed all international records and reached 2101 members!

In 2019 the Barcolana officially became the biggest regatta in the world.

The Guinness World Record has certified it, inserting the 50th edition of the regatta among world records.

"The largest regatta in the world - writes the Guinness World Record - has 2689 participants and is the Barcolana of Trieste."

The record was obtained on October 14, 2018.
But why does this regatta hold such fascination?
Because it epitomises the intimate links, the love affair, between Trieste and the sea. Because it's important to take part and say "I was there". Because the festival involves participants and spectators alike. The excitement begins when the Barcolana Village is erected, grows as the boats arrive, and peaks on the day of the regatta. Everyone lines up to watch the great spectacle in the Gulf of Trieste.

For lovers of the sea and sailing, and those who wouldn't dream of missing such a unique spectacle, the regatta takes place in Trieste every year on the second Sunday of October.

Barcolana: A Journey Beyond Racing
Where are the best places to watch the regatta?
- the Napoleonica, a scenic track between the Opicina Obelisk and the Prosecco rock-climbing area.
- the Vittoria lighthouse, which opens for the occasion in the morning
- the Santa Croce observation post, one of the most scenic points of the outer Karst region
- the Trieste seafront, to applaud as the winner arrives in front of Piazza Unità
- the Muggia Promenade, to see boats arriving at the first buoy
- and obviously, on a boat ;)