The Trieste Synagogue was built in 1908-12 to the plans of Ruggero Berlam, in collaboration with his son Arduino, replacing four earlier smaller synagogues. 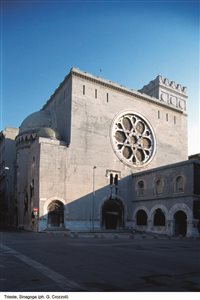 The Jewish temple in Trieste is one of the largest in Europe. In fact, when it was built, the Jewish community in Trieste had more than 5,000 members and played an important role in the city's economic and cultural life.


The community had grown to 6,000 members by 1938, but after the proclamation of the Racial Laws by Mussolini (in Unità di Italia Square, no less, in 1938) and the German occupation in 1943, the Nazis began harsh roundups and persecutions. In fact, the only concentration camp in Italy was built at the Risiera di San Sabba (San Sabba Rice Mill), and 710 Jews were deported from the city.
At the end of the war, in 1945, only 2,300 Jews remained in Trieste. Today, the Jewish community has approximately 700 members. 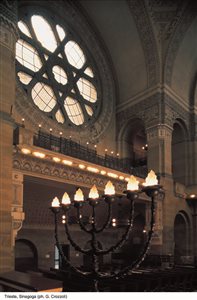 But the Jewish community has very deep roots.
The oldest official document that mentions a Jewish settlement in Trieste, albeit a small one, is dated 1236 and consists of a notary act that mentions the Jew Daniel David of Trieste, who spent 500 marks to fight thieves on the Karst plateau.

From an architectural perspective, the synagogue is rather original - it features Middle Eastern-inspired decorations and stylized Jewish symbols.
The large central dome can only be glimpsed from a distance, while the half-dome and small side domes are visible from the square and nearby streets.
Guided tour times (excluding Jewish and civil holidays)
Individual:
Sunday at 10.00 and 11.30 (starting from Sunday 24 April 2022)
Monday at 5.00 pm;
Tuesday at 10.30;
Wednesday at 17.00;
Thursday at 16.00 (starting Thursday 28 April 2022)

Guided tours for groups (15-50 pax) by reservation from Sunday to Thursday, by contacting gruppi@triestebraica.it

* The reduction applies to children 10-18, students (including university students) and groups.
Free admissions for under 10 (on individual visits), disabled people and carers. 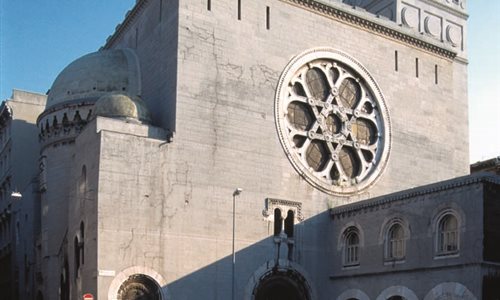