The Cathedral of San Giusto stands on the hill of the same name, in the heart of the ancient Roman city of Tergeste. 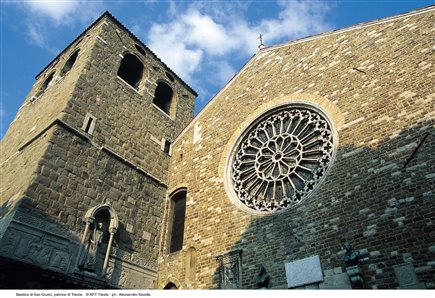 Initially, towards the middle of the fifth century, an Early Christian basilica featuring a nave and two aisles, a presbytery with an apse, and mosaic flooring, was built where the capitolium (temple) once stood.

During the ninth century, two sacred buildings were built. The first was a cathedral smaller than the previous, dedicated to the Assumption of the Blessed Virgin Mary, with a nave, two aisles and three apses, while the second was the Sacellum (Shrine) of San Giusto. 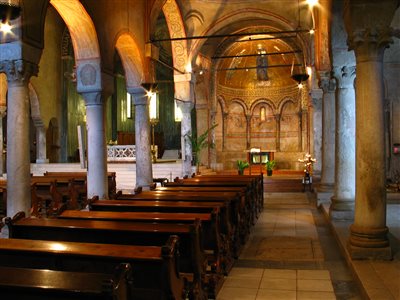 The remaining central apses of the two buildings were later covered with precious mosaics, the first depicting the Virgin Mary enthroned, and the second an inspiring Christ, Saint Justus and Saint Servulus.

The façade is adorned with a delicate and elegant Gothic rose window.
The solid, squat bell tower incorporates the remains of the Roman propylaeum. The niche contains a fourteenth-century sculpture of Saint Justus holding a martyr's palm and a model of the walled city he protects.

The interior, with its nave and four aisles, offers a striking sight. The Byzantine-Ravenna inspired mosaics adorning the two apses are exquisite.

The Chapel of the Treasure holds important objects like the reliquary urn of Saint Justus and the Battuti crucifix, both dating from the thirteenth century, and the halberd of Saint Sergius, which has become the emblem of Trieste (according to legend, the weapon miraculously fell from the sky into the city forum on 8 October 303, when the holy soldier was martyred in Syria).

Interesting fact: It appears that the weapon-reliquary is resistant to both rust and gilding. 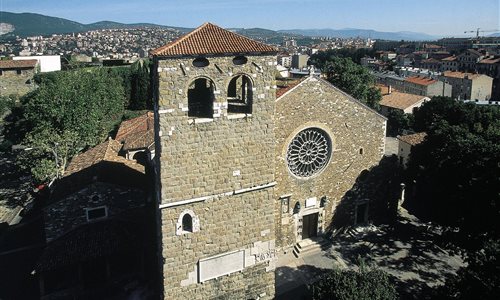