The Sanctuary of Santa Maria Maggiore rises majestically alongside the small Romanesque church of San Silvestro. 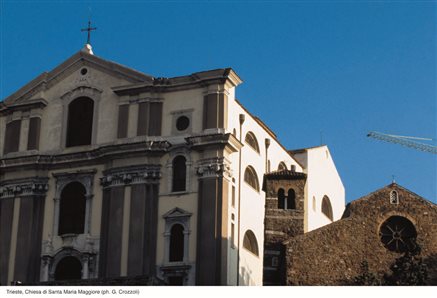 The church was built between 1627 and 1682 by the Jesuits, who arrived in Trieste in the early years of the century.

It was not completed until much later. In fact the façade was not finished until the beginning of the eighteenth century, apparently to plans by the famous architect Brother Andrea Pozzo.
In 1849 a cholera epidemic broke out in Trieste, claiming many lives in just a few months. During this terrible plight, the city placed its faith in the protection of Our Lady of Health and on 21 November gathered together for a procession at the Jesuit church, where the bishop held a solemn pontifical high mass.
Since then, each year on the Feast of the Presentation of Mary in the Temple, commonly known as Our Lady of Health, large numbers of residents congregate at the sanctuary to participate in liturgies in her honour.
The devotion to Our Lady is promoted primarily by the Confraternita della Madonna della Salute (Brotherhood of Our Lady of Health), founded in 1827.
The floor plan of the church is a Latin cross. The interior comprises a nave and two aisles with barrel vaulting, while a dome (rebuilt in 1817 after a fire) rises above the intersection of the transept.
Santuario di S. Maria Maggiore (Sanctuary of Santa Maria Maggiore)