From Monday 1 February, when Friuli Venezia Giulia will also pass into the "yellow zone", the Miramare Museum opens, while the historic park, apart from a brief interruption at Christmas in accordance with the substantial lockdown, had never been closed thanks to the obtaining a special exemption.

Like all museums, Miramare will reopen only on weekdays, from Monday to Friday, weekends excluded due to state of emergency restrictions, as stated in the latest Dpcm, effective from January 16.

The Miramare Castle will open continuously from 9 to 7pm (last admission at 6.30pm).
The Miramare Park is open every day: from 1 February the opening hours will be extended, from 8 to 5pm.
At the moment the guided tours with fixed departure which were held on Saturdays and Sundays are suspended.

With the Castle and the Miramare Park, the Infopoint managed by PromoTurismoFVG, located at Porta della Bora, will also reopen on Monday.

Naturally, museum visits will take place safely and in compliance with all the rules already tested this summer after the restart in June. Restricted admissions, obligation to wear a mask and keep the distance, hand sanitation, the most important rules.
Castello di Miramare - Parco di Miramare
viale Miramare
34151 Trieste
tel. +39 040 224143
info@castello-miramare.it 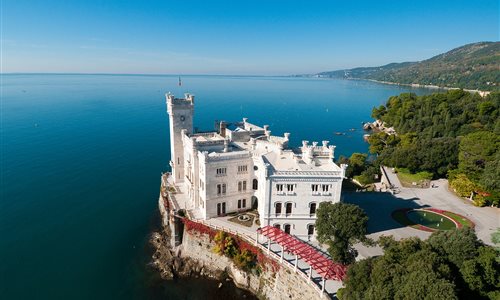