The major exhibition devoted to the brilliant Dutch artist Maurits Cornelis Escher is being held at the Salone degli Incanti in Trieste!

Escher was born in Holland in 1898 and died there in 1972. In 1922 he came to Italy for the first time and made the country his home for many years, travelling its whole length form north to south and depicting it in many of his works. Restless, reserved and an undisputed genius, in his famous engravings and lithographs Escher created a unique, imaginative, impossible world combining art, mathematics, science, physics and design. Discovered by the general public in recent years, he has become one of the most popular artists worldwide, in fact his exhibitions have had record visitor attendance.

Now a retrospective comprising 200 works and all his masterpieces is coming to Trieste, thanks to Trieste City Council and Arthemisia, which confirms the partnership previously crowned by the resounding success of the exhibition 'I Love Lego', which was a record-breaking event to date for the capital city of the Friuli Venezia Giulia region.

An extraordinary (re) opening for the Escher exhibition in Trieste, from Saturday 30 May to 19 July 2020
The exhibition spaces have been adapted to protect the health of visitors, applying the safety rules provided.

To allow for safety distances, they will be able to access 5 visitors every 5 minutes, for a maximum of 60 people per hour; all visitors must wear a mask and gloves.

The exhibition will be open every day from 3.00pm to 8.00pm and booking is highly recommended, at www.mostraescher.it.

You can buy the ticket also in place, but priority will be given to visitors booked.

#GiftForGuests > Stay in Trieste and get your free Ticket 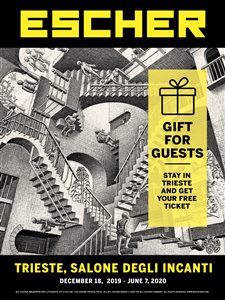 Stay at least one night in Trieste and receive a coupon for free access to the exhibition!*


Where to stay in Trieste