Imagine yourself in the retro ambience of the Covered Market's building! 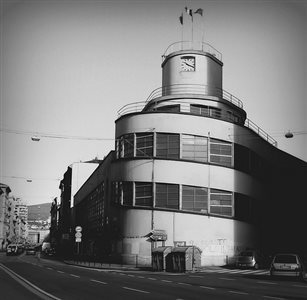 Trieste's Covered Market was built as a gift from Sara Davis, daughter of a rich English business man, to the venderigole, the women selling from market stalls in the streets of Trieste. Sara had noticed the hard life, beneath the sun and exposed to the strong Bora wind, of the women working at the market in Piazza Goldoni. Thanks to her bequest the Municipality of Trieste built the current market, designed by architect Camillo Iona.

Inaugurated in 1936, it is still a modern and functional building with characteristic large windows. The structure has a triangular layout; the spacious area at the centre of both floors evokes the style of Trajan markets. The division arches are an explicit reference to the salons of the Victoria, the luxurious, modern ship launched by Lloyd Triestino in 1931.

Functionality is essential throughout the interior of the building and is especially evident in the helicoidal ramp that connects the ground floor to the first floor, to allow access to carts transporting goods. This solution was inspired by the ramps built by Vignola in Caprarola, and later "reinvented" by Mattè Trucco for the Fiat Lingotto factory in Turin (1926), and used by all garages in Europe and America ever since. The ramp is enclosed in a corner tower, which Iona designed to resolve the problem of the acute angle forming at the conjunction between the two streets running alongside the building.

The distinctive ribbon windows reach all the way up to the top of the building, where a luminous clock is located. The solution of a corner tower as the linchpin of the building had already been experimented at the beginning of the XX century by John Soane at the Bank of England, an example of visual patterns complementing a structure's functionality and purpose.

The Covered Market is the prototype of today's shopping centre. Stalls are laid out on both floors.
On the ground floor you'll find fruit and vegetables, meat, fish and bread. On the first floor, men and women's clothing, fashion accessories and shoes. 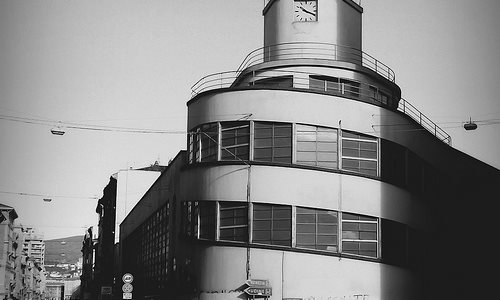