One of the landscapes most cherished by Trieste residents, this has been a place for meeting and relaxing for generations, as well as one of the most valued rock climbing areas in Europe. This was where Emilio Comici, one of the greatest and most elegant climbers of all time, first learnt his craft. 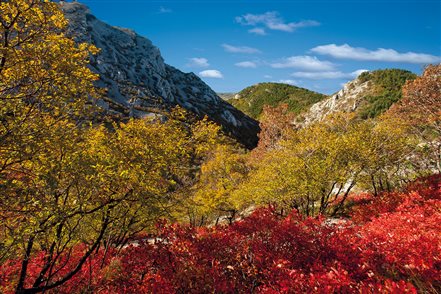 The 15 km-long Rosandra Stream starts in Slovenia at 413 m above sea level, crosses the Karst plateau, circles around Mount Carso, flows into the valley and finally empties into the Bay of Muggia. Inhabited since antiquity, for centuries this valley was the route to the sea from the Karst plateau.

It was therefore the setting of endless battles between the residents of Trieste and Muggia seeking to gain control of the path (trail marker 1, formerly CAI No. 13), known as the "Via del sale" (Salt Route) because it was used by the "mussolati," (from the Triestine word "mus", meaning donkey), the donkey caravans that travelled from Pese to Zaule, where they exchanged grain and minerals for salt and wine.

The importance of the area's geology (with its splendid examples of karstification, calcareous rocks and Flysch), botany, archaeology and palaeontology (remains of orsus speulus were discovered in a cave), and climatic features (for example, the famous "Bora Saddle", which acts almost like an acceleration lane for the characteristic Trieste wind), led to the establishment of the Val Rosandra Nature Reserve. 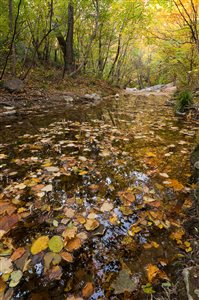 Starting at the Premuda mountain hut (the lowest mountain hut in Italy), follow trail No. 1 (formerly CAI 13), initially walking along the ancient Roman aqueduct (first century AD) on the right-hand side of the valley while slowly climbing. You can admire the stark Karst landscape and the valley of the Rosandra Stream with its pools and the waterfall at its end.

At a certain point you come to a fork where you can choose to turn right and take the decidedly more difficult trail that leads to the Comici memorial stone and the small Church of Santa Maria in Siaris, or turn left and take the main trail known as "Sentiero dell'Amicizia" (Friendship trail), an easy path that climbs slowly uphill and leads to Bottazzo, a small village located just before the border with Slovenia.

Inhabited since antiquity, until 1934 this small settlement had watermills for grinding grain, the remains of which are still visible today. For a long time, milling grain was the primary activity and five mills were built for the purpose. Milling ended in 1934 but evidence of it remains in the form of the mill that is still visible today just before you reach this small village.

Today, Bottazzo is also famous for an ancient inn where you can try a marvellous goulash with gnocchi and other Karst plateau specialties.

Until recently there was a narrow-gauge railway on the other side of the Rosandra Valley. The entire stretch of railway has since been turned into a beautiful and charming cycling path (the Giordano Cottur walking/cycling path), which ends in Hrpelje in Slovenia. 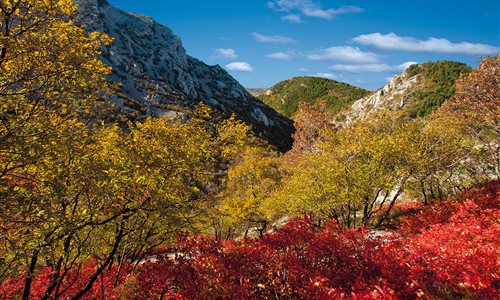