Trieste was the cradle of Svevo and Saba, Joyce's procuress, Richard Francis Burton's "favourite retreat" and the consular office of Charles Lever, Stendhal and Ivo Andrić. It was godmother to the works of Vladimir Bartol, Srečko Kosovel, Fulvio Tomizza and many other important writers and poets who wrote in Italian, Slovenian, German and other languages 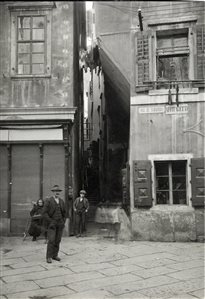 Hello, and Welcome! Yes, the city is a bit unusual.
But it offers such a wealth of beauty and marvels that you are sure to fall in love with it.

In addition to being the city of the Barcolana, science and coffee, did you know that Trieste is also, for example, one of the - unrecognized - world literary capitals? What other city of this size (which at the height of its glory had just over 200,000 residents) can boast of being one of the most important centres for the evolution of Modernist literature? And of continuing to produce, through its writers, art and literary culture beloved around the world?

It was the cradle of Svevo and Saba, Joyce's procuress, Richard Francis Burton's "favourite retreat" and the consular office of Charles Lever, Stendhal and Ivo Andrić.

It was godmother to the works of Vladimir Bartol, Srečko Kosovel, Fulvio Tomizza and many other important writers and poets who wrote in Italian, Slovenian, German and other languages.
Even today, at least ten leading national and international writers work in Trieste, including Nobel Prize candidates like Boris Pahor and Claudio Magris. 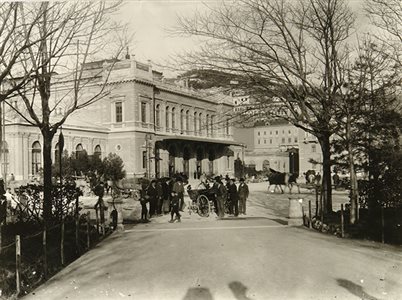 Come, I'll take you on a short tour of the city to help you understand - all the walls here, the streets, the squares and the buildings, seem to be made of solid stone and marble, but in reality it's all paper, written paper.

Let's begin with the very train station that we have just left. It was here that James Joyce arrived in Trieste on 20 October 1904 and succeeded in the difficult task of being arrested (by mistake) within a few minutes of his arrival. His unlucky companion Nora, who didn't speak a word of Italian or German and carried no money, had to wait for him for hours in the small garden that you see here in front. This was the remarkable beginning to a relationship - between the Irish writer and the Adriatic city - that would have very important consequences for both. 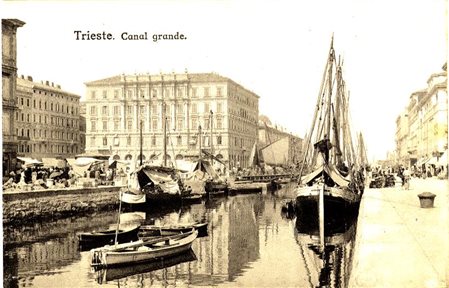 But let's continue. Here, on the left in just a moment we will come to what Joyce, in a letter to his friend Italo Svevo, called "The canal that comes from afar to join the great Antonio Taumaturgo [the Neoclassical church that you see there in the background], and then changes its mind and goes back as it came".

But first, keeping to the side of the road away from the sea (which shimmers farther ahead, on the right), we come to the first building in the city owned by Generali, the important insurance company. Franz Kafka, who had just been hired by the Prague branch of the company, is thought to have sought a post here in 1907. Instead, somewhat ironically, that same year one of his colleagues who was also destined to make a name for himself in the literary world was sent to Trieste - Leo Perutz. It was also here that, many years later, Biagio Marin (the poet from Grado) worked as a librarian.

In Trieste, culture and business are tightly bound in a knot that is impossible to untie. See that beautiful building just past the canal, the one with the lovely dome and statues? It was the residence and warehouse of one of the wealthiest merchants of the Trieste marketplace, a Greek named Demetrio Carciotti. This fact, however, does not prevent the building from being one of the most stunning examples of Neoclassical architecture in a city that has been said to be entirely Neoclassical, perhaps as an apology for the death in 1768 of the father of Neoclassicism, Johann Joachim Winckelmann, killed by a young man armed with a knife.
Let's cross the street. This building to the side was a hotel called the Hotel de La Ville, where Adalbert Stifter and Giuseppe Verdi once stayed, as the two commemorative plaques state.

There is no plaque to remind us, however, that it was also the first residence in Trieste of Richard Francis Burton, the explorer of the sources of the Nile who made a pilgrimage to Mecca and was the author of two of the most scandalous translations of the Victorian era - the Kamasutra and The Thousand and One Nights.
If you like, later you can take the Opicina tram, the old line that climbs up the Karst embankment, to see the former Albergo all'Obelisco (sadly in ruins), where the English explorer finished his work. 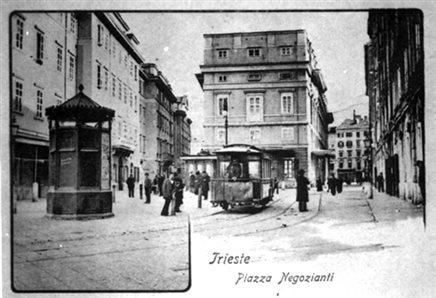 For now, let's just continue another block and turn left between the Greek Orthodox Church of San Nicolò (well worth visiting if it's open) and the well-known Caffé Tommaseo, one of the historic Viennese-style cafes for which Trieste is famous.

The café is celebrated in a poem by Umberto Saba entitled Al Caffé dei Negozianti (At the Merchants' Cafe).

In fact, the poet's footsteps echo at every turn in this area. Further ahead on this same street, at number 30 - which by chance is the same address as the Berlitz School, the language school where Joyce worked - his antique bookshop still exists with the same timeless atmosphere.
Now we make a quick right turn, passing in front of the workplace home of Saba's friend, the extraordinary intellectual Anita Pittoni, the companion of Giani Stuparich and soul of the "Lo Zibaldone" publishing house, as we cross Borsa Square.

The majestic, recently restored building on the right past the portico of the Borsa building is the Tergesteo, the setting of many of the scenes of merchant life in Svevo's novels. More importantly, it was the headquarters of Banca Union, the institute where Ettore Schmitz (Italo Svevo) worked for almost twenty years, leaving an unforgettable description of it in his first novel Una Vita (A Life).

And if we cross the square here, perhaps taking advantage of the underpass known as the "Portizza", we arrive in the Jewish ghetto, which Saba described in vivid detail in the Gli Ebrei (The Jews) section of his Ricordi - Racconti (Memories and Stories) and which Svevo visited as a child to attend synagogue.
After walking a few minutes, we arrive at the Arch of Riccardo, a Roman ruin.

I wanted to show it to you not only because there was a tavern here that served Opolo wine from Vis, which Joyce avidly enjoyed, but also because the alley that crosses it played an important role in a noteworthy but little-known novel from 1902 entitled Aus dem Triumphgasse (The Alley of Triumph) by the noteworthy but little-known (at least here) author Ricarda Huch.

This helps to illustrate that the notable and famous aspects of literary Trieste are just a part of this glorious history. It's absolutely true: at the end of World War I, during a brief, unrepeatable period, strong winds of change originating in Trieste radically transformed Italian lyric poetry (with Umberto Saba's Canzoniere (Songbook) released in 1921), English prose (with James Joyce's Ulysses, published in 1922) and Italian prose (with Coscienza di Zeno (Confessions of Zeno) in 1923).

But before, and more importantly, after this brief period, dozens of extraordinary authors in this same city produced a steady flow of literary writings that crossed languages, movements, identities and histories, contributing to the dawn of a period of artistic achievement that has few equals. A few residents of Trieste are aware of this. Many are not. Now you can enjoy the luxury of telling them about it, seated at a nice café table with a steaming cup precariously balanced on a pile of recently purchased books.