Dedicated to the Trieste writer Italo Svevo, the pseudonym of Ettore Schmitz, the Svevo Museum contains mementos of the novelist that survived the bombing of his villa, in 1945. 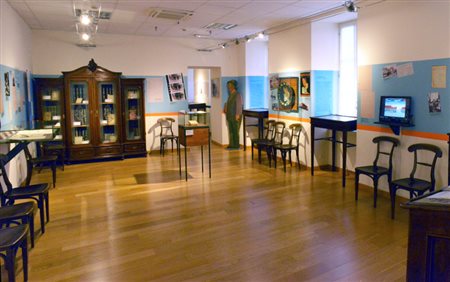 Among them were his mobile-library, containing some personal volumes, his gold pen, his violin, his archive containing the original manuscripts of his stories, essays and plays, family photographs, his correspondence with the likes of Joyce, Montale, André Gide, Prezzolini, Comisso, and hundreds of letters to his wife Livia Veneziani.
The Museum also houses a library that is constantly updated with new editions of Svevo's works and contains the world's largest collection of literary critiques of Svevo. In addition, the Museum actively promotes Svevo's work by planning and organizing various activities and events, and on December 19th of each year it celebrates the anniversary of the writer's birth with an event entitled "Happy Birthday Svevo".
Group booking
The group leader must ensure interpersonal distancing of at least one meter between members, except for cohabiting groups.
In consideration of the organization of the spaces of the individual museum structures, the composition of each group is allowed:

Reservations (max 1 group every 15 minutes) can be made from the home page of the single Museum which directs interested parties to the Midaticket portal; to the e-mail address of the individual Museum; by calling the Museum directly during opening hours.
E-MAIL RESERVATIONS ARE ACTIVATED FOR THE FOLLOWING MUSEUMS
Civico Museo Sveviano - www.museosveviano.it - e-mail museosveviano@comune.trieste.it