The Joyce Museum is dedicated to the almost eleven years that the Irish writer spent in Trieste. 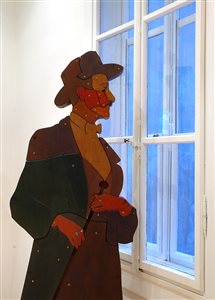 It comprehensively documents his life: his relationship with the urban bourgeoisie, the many apartments in which he lived, the places he frequented (churches and taverns, newsrooms, villas and brothels), his family, and above all the literary works written in Trieste - A Portrait of the Artist as a Young Man, Exiles, the little prose poem Giacomo Joyce (his only work set in Trieste), and the first three chapters of his masterpiece Ulysses. There is also evidence of his great friendship with the Trieste writer Italo Svevo in the form of correspondence between the two. Indeed, there are many who identify Svevo with Leopold Bloom, one of the characters of Ulysses.
The Joyce Museum celebrates Joyce and his work once a year on "Bloomsday", June 16, with the emphasis on his masterpiece Ulysses.
Museo Joyce Museum
via Madonna del Mare 13
tel. +39 040 3593 606
+39 040 3593 607
museojoyce@comune.trieste.it