This is named after Jancsi Rigó, a famous first violin in a gypsy orchestra, who seduced and married the daughter of an American millionaire, Clara Ward, the wife of the Belgian Prince of Chimay and better known as the Princess of Chimay. 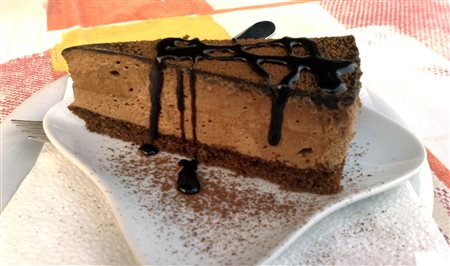 Their marriage, which caused a scandal around the world, produced no children, but gave birth to a delicious dessert.

The local newspaper, "Il Piccolo", of May 5, 1898 - reported that on disembarking from the steamer Bohemia arriving from Alexandria, the young and controversial couple were greeted by a cheering crowd that accompanied them, singing and dancing, all the way to the Meridionale station.


Cream the butter with the 30 g of sugar and the egg yolks. Whisk the egg whites with the 50 g of sugar and add this to the mixture, followed by the flour and cocoa.
Pour this mixture evenly to a thickness of about 1.5 cm on a large baking tray covered with paper, and bake at 200-220°C for 15 to 20 minutes.
Sprinkle the surface with flour, turn it over, remove the paper and leave to cool.

Meanwhile, melt the chocolate in a bowl immersed in a pan of hot water, whisk the sugar with the cream, previously brought to the boil and allowed to cool.
Add part of the cream to the hot chocolate and stir rapidly until it becomes smooth, and then add the rest.

Cut the pastry baked earlier into halves, spread a thin layer of jam on one half, cover it with the dark chocolate, and cut it into 5x5 cm squares when cooled.
On the other half spread the whipped cream which has been mixed with the chocolate, cover with the chocolate-coated pastry squares and let it cool.

Cut it with a knife which has been dipped in hot water and thoroughly dried.