Simple to make but with high nutritional value from the dried peas, this very old household recipe is still part of Trieste's culinary tradition. 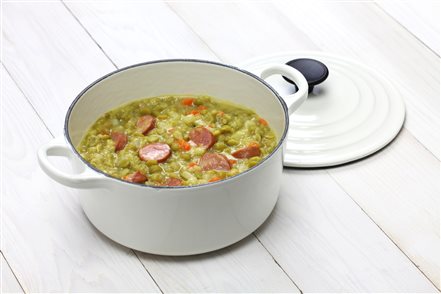 Bunkersuppe was so named because it was often fed to Austrian soldiers in the trenches (bunker) or to their prisoners.

Put the peas in a bowl with plenty of water for at least 3 hours.

Sauté the shallots with the lard and a little oil in a saucepan, remembering to dilute with a little water occasionally.  Add a handful of flour to thicken the sauce, and brown over a low heat.

When the lard is melted, add the peas- thoroughly drained and rinsed - to the mixture, cook for a few minutes, cover with water and simmer for about two hours.

After about one hour, when the peas have softened, add the luganighe sausages and the ribs, and simmer until these are cooked and the peas have become creamy.
Add salt and oil to taste.