An ancient and traditional Trieste dish that has probably not changed in 500 years. 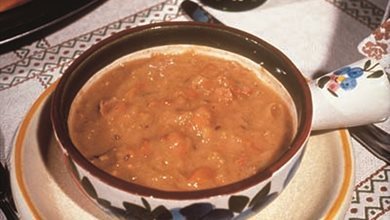 Jota was originally a "leftovers dish": a few beans, some cabbage and a little leftover pork could make a dish to feed the whole family. It uses simple and mostly local ingredients such as beans, potatoes (introduced after the discovery of America in 1492), and capuzi garbi, i.e. strips of cabbage fermented in brine, which the Triestines claim to have been producing since the time of Charlemagne, and definitely not to be confused with German or Austrian sauerkraut. The term "jota" has disputed origins. The root seems to derive from a Celtic suffix, later contracted into the Latin jutta, (meaning gruel), or from the Cimbrian yot (Cimbrian being a language of Germanic origin, widespread in Veneto and Trentino); there is also a Czechoslovakian cabbage soup called jucba.

Ingredients (for 4 people)
700 g of capuzi garbi (you can buy this ready-made - but recipe can be found if you prefer to make it)
300 g of red or black eyed beans
4 potatoes
2 bay leaves
4 garlic cloves
2-3 fresh smoked Cragno sausages or some smoked pork ribs or a ham bone
50 g of lard
2 tbsp of flour
Vegetable broth (as needed)
salt
pepper
oil
aiprem (flour toasted in oil).

Curious fact
Cragno sausages, made from cured meat smoked over beech wood, were originally produced in Ljubljana, but later became traditional in Trieste as a cooked food.

The evening before, put the beans to soak in cold water.

Heat the lard in a saucepan and fry 2 crushed garlic cloves until they turn golden brown.
Remove the garlic, add the capuzi garbi and cover with water.
Add salt and pepper.

Gently simmer over a low heat for about 1/2 hour.

After washing and draining the beans, place them with 2 bay leaves and the vegetable broth in another pan and cook on a low heat for about 1 hour.
Add the sausage (cut into pieces) and cook for another 15 minutes. Peel and cut the potatoes into small pieces, add them to the soup, and cook for a further 20 minutes.

Remove from the heat and sift half the beans and potatoes until they form a smooth puree.
Add the puree and the previously prepared cabbage, to the soup.

In a small saucepan fry the remaining garlic cloves, crushed in 1-2 tbsp of oil (or lard). Discard them when browned.

Cook the flour in the oil (or lard), stirring carefully to avoid lumps.
When toasted, add this to the soup, stirring well.

Season with salt and pepper and serve hot.
Jota is even more delicious if prepared a day in advance.