The tidal measurements of Trieste

A tide gauge carved in stone, calibrated in Parisian feet and inches, and probably dating back to 1785, can still be seen on the right bank below the Ponterosso (Red bridge).

The Zero of this gauge, known as "Zero Ponte Rosso", marked the level of low tide throughout the former Austro-Hungarian Empire.

However, from 1875 a hydrometric station built for the Maritime Government was used as a reference for the whole Empire, including Serbia and Montenegro. Its management was entrusted to the Commercial and Nautical Academy, located in the Casa dei Piloti (The Pilots' House) on the jetty, before the construction of the present Yacht Club Adriaco headquarters at the end of Sartorio Pier.

The measuring gauge was made of a cast iron vertical pipe embedded in the pier, its upper edge, at ground level, defining the "Sartorio Pier Zero". Mareographic data for Trieste were published from 1869 by the Commission for the Adriatic. When the Pilots' House was demolished in 1925, the Molo Sartorio station was moved to its current position (45 ° 38 '50.5 "N, 13 ° 45' 30.5" E), passing first under the management of the Geophysical Institute and then of the Trieste Institute of Experimental Thalassography (IST).

The "Molo Sartorio Zero" is now found in the mareographic cabin and although no longer in use, remains a historically important reference point. 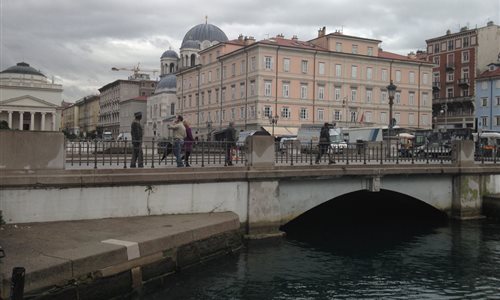