The Post Office building was built in 1894 to a design by Francesco Setz of Vienna. 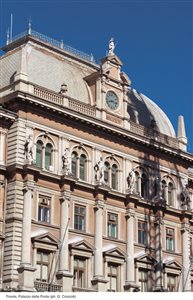 The facade is graced by six statues representing Navigation, the Railroad, Commerce, Viticulture, Agriculture and Industry.

But the real delights are the Postini Puttini, positioned on the side entrances in via Milano and via Galatti, one wearing the typical Austro-Hungarian postman's hat and a shoulder bag from which he has taken out two letters for delivery, while the other blows a horn and wields a coachman's whip.