Hystory for children - Who lived at Miramare? Ferdinand Maximilian and Princess Charlotte. Who were they?...

Ferdinand Maximilian of Hapsburg (also known as Maximilian of Austria or Max, as he was called at home) was the brother of the charming Franz Joseph, the Emperor of Austria.

As the second-born son, he had the title of Prince Imperial and Archduke of Austria, along with a long list of other titles, which was typical for children of emperors at that time.

Gifted with uncommon intelligence, from an early age he showed great interest in the arts and sciences, particularly botany. Look around inside the castle - you will often find decorations with pineapples!

Attracted to the Navy, he decided to embark on a military career and was quickly promoted to the high rank of officer. Inside the castle, you can see tapestry with anchors in his rooms. During his service, among other accomplishments, he had a hand in renovating the Port of Trieste (which was under Austrian rule at that time) and contributed to the creation of the Austrian Imperial fleet. 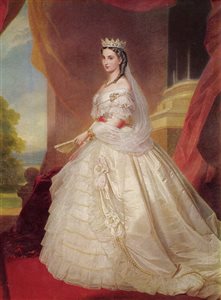 Despite being a member of the imperial family, he had "liberal" ideas that helped him when his brother named him Viceroy of Lombardy-Veneto. This gave him an opportunity to showcase his charisma. Although the Italians were unhappy about being under Austrian rule, they highly valued and appreciated Maximilian's diplomacy and intelligence.
In July of 1857, Maximilian married Princess Charlotte, the daughter of Leopold I of Belgium, and together they moved to Trieste.

Since they were both fond of nature and the sea, the royal couple decided to build a wonderful castle on the Grignano promontory as their home. The architect Carl Junker undertook the project and quickly had the ground floor finished. Charlotte and Maximilian were therefore able to move in immediately, despite the work still underway on the upper floor.

Max personally oversaw the garden, enhancing it with plants, including quite unusual ones, brought from all over the world.

Life in Trieste did not satisfy Charlotte's ambitions, however. The princess was jealous of her splendid sister-in-law Sissi (wife of Franz Joseph and Empress of Austria). Charlotte schemed and plotted until she finally convinced her husband to receive a delegation of Mexican noblemen, who offered Maximilian nothing less than the crown of Emperor of Mexico.
Although he initially refused, at the insistence of his wife and also for political reasons he later accepted.

Accompanied by his wife, he set sail for Mexico from Miramare Castle aboard the frigate Novara on 14 April 1864.
Inside the castle, there is a large painting of their departure. Can you find it?

When they reached Mexico, however, the situation was very different from what they had imagined and dreamed. A war was underway and the Mexicans did not want an emperor, much less an Austrian emperor - they wanted a republic.

After a short time, Charlotte returned to Europe to seek help for her husband, but nobody was interested. The young empress withdrew to Miramare. Since the castle was too large and empty without Max, she stayed in the chatelet, where she had lived with her husband while the castle was being built.

Time passed and the news that arrived from Mexico was not good - Maximilian was captured by republican troops and sadly killed.

Charlotte slowly went mad and left Miramare to return to Belgium, where her brother took care of her until she died.