The legend of the Bora

Legend tells of Aeolus, the father of the winds, who travelled the world with his beloved children. 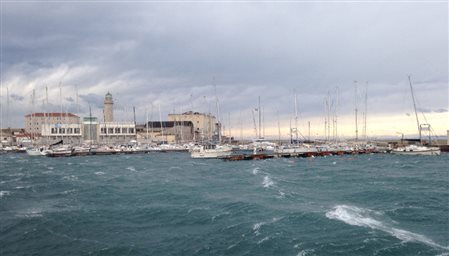 His favourite among these was the young and capricious Bora. One fine day, they reached a lush plateau that descended steeply towards the sea, and Bora wandered away to go and play with the clouds. After a while she entered a cavern out of curiosity and met Tergesteo, an Argonaut who had just returned from the "Golden Fleece" odyssey. It was love at first sight - the two young ones enjoyed seven blissful days of overwhelming, tempestuous passion in the cavern. When Aeolus realized that his favourite daughter had disappeared he became worried and decided to look for her.

After days of desperate searching he finally found her. Seeing her embracing Tergesteo, he became so furious that he attacked the young man, violently throwing him against the walls of the cave until he lay on the ground lifeless. Bora's father ordered her to leave with him but, devastated by grief, she would hear nothing of it and burst into a weeping so desperate that each tear that fell turned into stone.

She cried so many tears that the lush ground of the plateau was completely covered with a blanket of stones, while Tergesteo's drops of blood gave life to the sumac, a wonderful plant that since then has flooded the Karst rocks with red each autumn. In the end, Aeolus gave up and decided to depart, leaving young Bora in the place that witnessed the beginning and end of her great love. Then the sea, taking pity, covered the body of the unfortunate Tergesteo with shells, starfish and green seaweed.

Over time, a pleasant hill formed on top of this mound, upon which would be founded a city that was named Tergeste in honour of Tergesteo, and is now Trieste. Bora still reigns here today because Heaven has allowed her to relive three, five or seven days of splendid love each year. These are the days when the Bora blows impetuously: "bright" when she is in the arms of her beloved or "dark", accompanied by tears of rain, when she is waiting to see Tergesteo once again.

Do you want to discover the places of bora? Download this brochure! (Pdf, 1.8 MB)