One of the most common capuzi garbi (sauerkraut) dishes. It is frequently served as a side dish with pork or boiled meat. 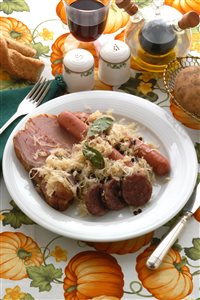 Put the capuzi garbi in a pan, cover with water and cook it for about 30 minutes.

Heat the lard in another pan, add the finely chopped onion and flour, and let it brown Add the capuzi garbi with its liquids, and season with a little salt and pepper, and a generous pinch of cumin. Simmer with the lid on, on a very low heat, until all the liquid has evaporated.

If you are wondering about something to accompany it, we suggest adding a Cragno sausage and some smoked pork ribs half-way through the cooking.